The following is a section from my 2007 letter to partners. It examines the buyout of the Tribune Company, an arbitrage situation we took part in last year. Tomorrow I will post another section that discusses risk arbitrage. (Please note that I have removed some of the non-public information that was included the actual letter). Enjoy! 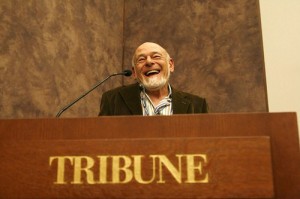 On April 2, 2007 Tribune Co. announced that Sam Zell prevailed in his bid for the struggling newspaper company. The final $34 per share offer was chosen over another eleventh-hour bid from Los Angeles billionaires Eli Broad and Ron Burkle. Sam “The Grave Dancer” Zell—contrarian real estate magnate—had just completed the sale of Equity Office Properties, his real estate holding company. With the cash he received from the sale (the largest leveraged buyout in history), Zell jumped back into business with his offer for Tribune. The company owns coveted newspapers such as the Chicago Tribune and the Los Angeles Times. Other assets include a string of TV stations and the Chicago Cubs baseball team.

Under the terms of the agreement, each share of Tribune would eventually be exchanged for $34 in cash. The deal would be subject to shareholder approval and regulatory clearance from the FCC. Sounds simple, right? The end result of the transaction was easy to understand, but the mechanics of the deal were anything but. It was especially unique because the shares would initially be owned not by Zell, but by an Employee Stock Ownership Plan (ESOP) where Tribune employees would share in the company’s upside.

Immediately after the announcement, the ESOP would purchase $250 million of newly issued stock for $28 a share. Zell’s initial investment consisted of a $200 million promissory note and $50 million in new stock. In May, Tribune would borrow $4.2 billion to finance the purchase of about half of the company from public shareholders.

After shareholder approval and FCC clearance, the ESOP would buy out all remaining holders and become a Subchapter S corporation (which passes all taxable income to its owners). Since Tribune’s sole owner would be the ESOP—another tax-free vehicle—the company would essentially pay no taxes. This plan would free up cash flow to pay down debt and reinvest in operations. When the deal closed, Zell’s initial $250 million investment would be redeemed. He’d then make a new investment, consisting of a $225 million eleven-year loan and a $90 million warrant. The warrant will give Zell the right to purchase 40 percent of the company for $500 million in the next fifteen years. For a total outlay of $315 million, Zell has a lot of upside and little downside—an excellent situation to be in, if I may say so myself.

And one more thing—if the deal didn’t close by the end of the year, starting January 1, 2008 the $34 price would raise by 8 percent annually. An important aspect for arbitrageurs, especially if the deal was delayed.

Everything went as planned through the May share repurchase. At this stage, Tribune was half its prior size and the ESOP owned about 7% of the company. Up until June, Tribune’s stock traded around $33 per share (a $1 spread), a more normal price for a deal only a few months from completion. Near the end of summer, the market started heading south. The credit crunch had investors worried that lenders would back out of commitments and tighten credit standards. Tribune shares fell to under $26 just before the August 21 shareholder vote.

On the day of the vote, I purchased Tribune stock for about $28 per share. It had shot back up from $26 as investors realized the vote was in the bag, with a 97 percent approval rate. As sentiment improved over the next few months, the price started moving back up. I sold our stake for $30 per share, a quick 7% gain (53% annualized). A good return by arbitrage standards, but I have no clue what I was thinking in hindsight. At this point there were very high odds the deal would go through, and I left a lot of gains on the table.

Thankfully, the share price went nowhere over the next six weeks, and I had the chance to redeem myself. At the end of November, the FCC finally approved the deal—putting it off until the last possible second. Four days later, I pulled the trigger again, buying back our stake for $30 a share.

At this point, there was only one thing that could possibly get in the way: the banks pulling their financing arrangements. But in my view, that was highly unlikely. A consortium of banks had already lent over $7 billion to Tribune, and they’d be shooting themselves in the foot by holding up the deal. Every player had huge incentives to complete the transaction before year end. After December, not only would the buyout price go up (more money from the banks), but Tribune would lose their preferential tax treatment for 2008. In the months preceding our purchase, Tribune stated on multiple occasions that the deal was still on track. Despite every step of it being followed by The Wall Street Journal, few investors took advantage of this underpriced opportunity.

So how did it all turn out? Sixteen days after our second purchase, the buyout was finally complete. Thirty-four dollars per share in cash was distributed to each remaining shareholder on December 20. For us, this worked out to a 12% total return, or 1,257% annualized (that is, if I got the same return every sixteen days for the next year).

Below are a few lessons you can take away from this investment. I’ll elaborate on some of them in my post title Risk Arbitrage 101 tomorrow.

1. In any special situation investment, it always pays to look at incentives.
2. Always know who’s involved—on both sides of the transaction.
3. The market hates complexity, so that’s usually a good place to find bargains.
4. Don’t listen to the market—especially when they’re thinking as a crowd.

I’ll finish the story with a quote from Sam Zell, at a press conference on December 20:

“I’m Sam Zell. I’m here to tell you that the transaction from hell is done. It’s also the transaction that nobody in the world except us collectively believed was going to happen, but it did.”

View all posts by Max