As with my other book notes, some passages are direct quotes and others are my own paraphrasing/summaries. Any footnotes or [brackets] are my personal comments. 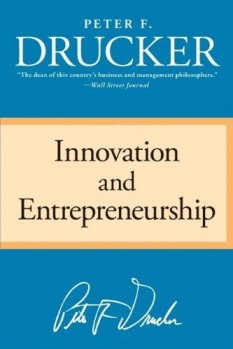 “The entrepreneur,” said the French economist J. B. Say around 1800, “shifts economic resources out of an area of lower and into an area of higher productivity and greater yield.”

The entrepreneur upsets and disorganizes. As Joseph Schumpeter formulated it, his task is “creative destruction.” They see change as the norm and as healthy. Usually, they do not bring about the change themselves. But—and this defines entrepreneurship—the entrepreneur always searches for change, responds to it, and exploits it as an opportunity.

When shifting resources to a more productive area, there is a risk the entrepreneur may not succeed. But if they are even moderately successful, the returns should be more than adequate to offset whatever risk there might be. One should thus expect entrepreneurship to be considerably less risky than optimization. Indeed, nothing could be as risky as optimizing resources in areas where the proper and profitable course is innovation, that is, where the opportunities for innovation already exist. Theoretically, entrepreneurship should be the least risky rather than the most risky course. [There are “hidden” risks of not being an entrepreneur.]

Systematic innovation consists of the purposeful and organized search for changes, and in the systematic analysis of the opportunities such change might offer for economic or social innovation. As a rule, these are changes that have already occurred or are under way. To be sure, there are innovations that in themselves constitute a major change (like the Wright Brothers’ airplane). But these are exceptions, and fairly uncommon ones. The overwhelming majority of successful innovations exploit change.

The first four sources of systemic innovation lie within the enterprise. They are basically symptoms, but are highly reliable indicators of changes that have already happened. All seven are listed in order of descending reliability and predictability. [Many can be used to locate opportunities for a new disruptive innovation.]

The last three sources for innovative opportunity involve changes outside the enterprise:

All the sources of innovative opportunity should be systematically analyzed and studied. It is not enough to be alerted to them. Go out and look, ask and listen. This cannot be stressed too often. An innovation, to be effective, has to be simple and it has to be focused. The greatest praise an innovation can receive is for people to say “this is obvious, why didn’t I think of it?” Innovate for the present! (Not the future.) Unless there is an immediate application in the present, an innovation is like the drawings in da Vinci’s notebook—a brilliant idea only.

Effective innovations start small. Grandiose ideas, plans that aim at “revolutionizing an industry,” are unlikely to work. Innovations had better be capable of being started small, requiring at first little money, few people, and only a small and limited market. BUT, if an innovation does not aim at leadership from the beginning, it is unlikely to innovate enough.

Many new businesses stumble after growth because they have a lack of top, experienced management. The remedy is simple: build a top management team before the venture reaches the point where it must have one. Teams cannot be formed overnight. If one or two people at the top believe that they, and they alone, must do everything, then a management crisis a few months, or at the latest, a few years down the road becomes inevitable.

I have never come across an “entrepreneurial personality.” The successful ones I know all have, however, one thing—and only one thing—in common: they are not “risk takers.” They try to define the risks they have to take and to minimize them as much as possible. Innovators must also build on their own strengths. Look at opportunities over a wide range—which fits you, or puts to work what you have shown capacity for.

There are four entrepreneurial strategies—none of which are mutually exclusive. Each fits certain kinds of innovation and does not fit others. Each requires specific behavior on the part of the entrepreneur, and each carries its own risks:

Market Dominance. The entrepreneur aims at leadership, if not at complete dominance of a new market or new industry. This doesn’t necessarily mean creating a big business right away (though that often is the aim), but to start at a permanent leadership position. It always aims at creating a new industry or a new market. At the least, it aims at ambitiously creating a quite different and truly new process. Because of this, non-experts and outsiders seem to do as well as the experts, and often better.

This strategy has to hit right on target or it misses altogether. And once it’s launched, it’s difficult to adjust or to correct. Market dominance should be based on careful analysis, and even then, it requires extreme concentration of effort. There has to be a clear-cut goal and all efforts have to be focused on it. And when the effort produces results, the innovator has to be ready to mobilize resources massively. It demands substantial and continuing efforts to retain a leadership position; otherwise, all one has done is create a market for a competitor. The market leader must be the one who systematically cuts the price of his own product or process. To keep prices high simply holds an umbrella over potential competitors and encourages them. (This is true even as demand rises.)

Of all the entrepreneurial strategies this is the riskiest. There are many very visible success stories in this category—but only because the failures have disappeared. For everyone who succeeds with this strategy, many more fail. It is risky enough that the next strategy (Creative Imitation) is based on the assumption that being the market leader ill fail far more often than it succeeds.

Creative Imitation. The Creative Imitator exploits the success of others, satisfying a demand that already exists rather than creating one. What the entrepreneur does is something somebody else has already done. But it is “creative” because they understand what the innovation represents better than the people who made it and who innovated. The strategy waits until somebody else has established the new, but only approximately. Then it goes to work. And within a short time it comes out with what the new really should be to satisfy the customer, to do the work customers want and pay for. Creative Imitation has the same goals as Market Dominance—but it is much less risky. By the time the Creative Imitator moves, the market has been established and the new venture has been accepted. It is most likely to work in high-tech areas for one simple reason: tech innovators are least likely to be market-focused, and most likely to be technology- and product-focused.

Entrepreneurial Judo. Another strategy that uses an incumbent’s success against them. Entrepreneurial Judo disrupts current innovations and catapults newcomers into leadership positions. It is by all odds the least risky and the most likely to succeed, able to be repeated over and over again. There are many reasons why it can happen: (1) incumbents have a “not invented here” belief that something new cannot be good unless they themselves thought of it; (2) the tendency to “cream” a market, or to get only the high-profit part of it, which also includes making only high-end products or fashionable products; (3) incumbents maximize rather than optimize, meaning they try to satisfy every user through the same product or service.

Entrepreneurial Judo aims first at securing a beachhead, and one which the established leaders either do not defend at all or defend only halfheartedly. It “hits them where they ain’t” by looking at markets and pinpointing the place where an alternative strategy would meet with the greatest success and the least resistance. [A textbook definition of disruptive innovation according to Clayton Christensen.]

Ecological Niches. Aims at obtaining a practical monopoly in a small area. As opposed to the other strategies, successful practitioners of the ecological niche “take the cash and let the credit go”—they wallow in their anonymity. The first niche strategy is the toll-gate strategy. It is where the product is essential to a process, and the risk of not using it is much greater than the cost. Also, the market must be limited enough that whoever occupies it first preempts it. It dominates the market completely and at the same time is small enough not to attract rivals. [The Specialists Dilemma applies to all these ecological niches. See also “Hidden Champions” for this strategy at work.]

The other is the specialty skill strategy. It is where specialized skills put a company so far ahead of their field that it is hardly worth anybody’s effort to challenge them. This has to be done at the very beginning of a new industry or innovation. It requires a skill that is both unique and different. To continue to occupy this niche, a company must constantly work on improving its own skill, and staying one step ahead (making itself constantly obsolete).

Changing Values and Characteristics. This strategy involves converting a current product, service or technology into something new. It creates a variation on a current innovation by changing its utility, pricing structure, or other better adaptation to the customer’s needs. It looks at the job that a customer is getting done and focuses on a better way to serve that need. For example, the Gillette razor/blade model, pricing plans for expensive but necessary products, etc.

View all posts by Max

One thought on “Book Notes: Innovation and Entrepreneurship”