[This is a cross post from the Explorist Productions blog. Explorist is a media company I founded that publishes content related to business, innovation, and discovery.]

The Berkshire Hathaway limited hardcover letters book and “50 Years of Berkshire” wall print are now available for purchase online. Both of these items were available at the meeting a month ago and I’ve received lots of praise about them from other shareholders, so I’m glad to finally make them available to everyone.

In the process of doing research for the visualization, I collected a lot of data on Berkshire’s financial history — much more data than could fit in the charts on the print.

So in addition to the wall print, I hope to release a few more posts further exploring the story of how Warren Buffett transformed Berkshire over the years. Once I reformat and clean-up it up, I’ll eventually release the raw data so that others can do their own analysis.

The following chart shows the cumulative contribution to book value* of selected investments over 50 years. This is a good yardstick for comparing how successful investments were over time. It doesn’t include insurance companies other than GEICO, as it’s too difficult to separate individual performance given available data. 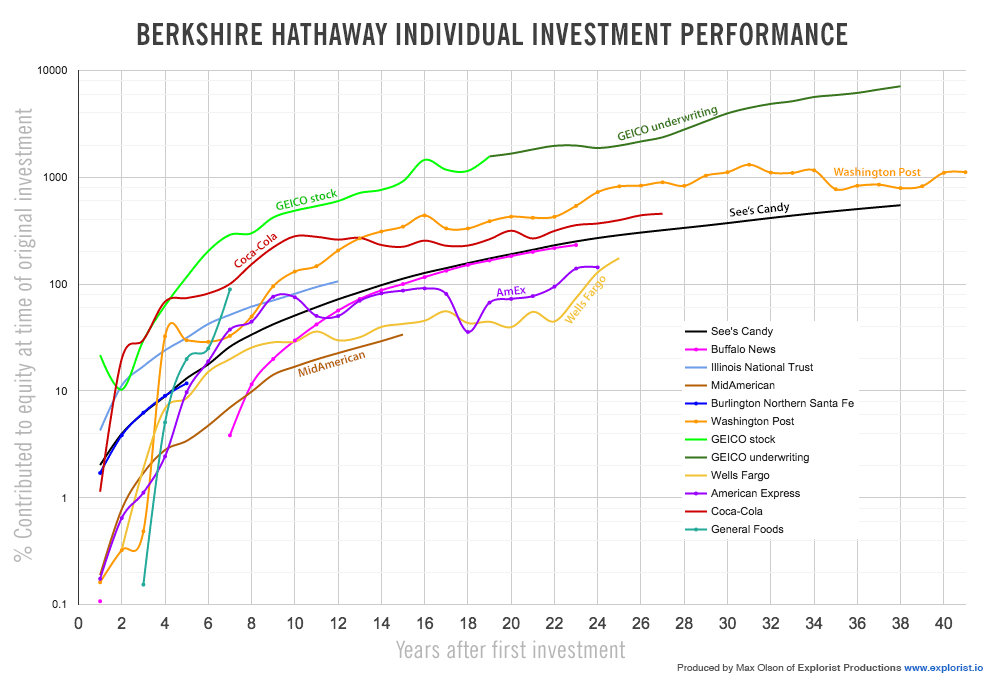 This measurement puts investments on an equal footing, allowing comparison across different timeframes. It implicitly accounts for both individual return and capital allocated to the investment. What is not accounted for is excess capital reinvestment — in other words, contribution is based on GAAP net income, not true free cash flow.

Get posts in your inbox via Substack.